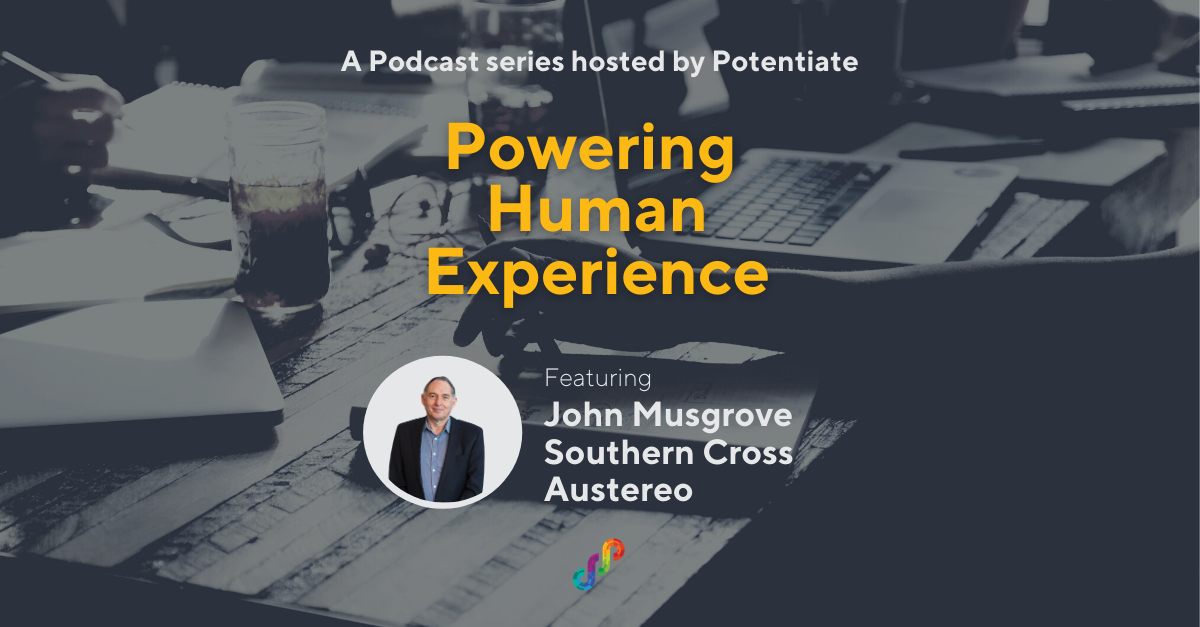 In this podcast, Ray Poynter (Chief Research Officer, Potentiate) interviews John Musgrove (Head of Research & Insights, Southern Cross Austereo) about the future of insights, as part of our Powering Human Experience series of interviews, being hosted by Potentiate.

Listen to the interview here:

‍Five years ago, people would have thought of SCA as a radio and TV media company in Australia. Today, SCA is an audio company, which includes 100 radio stations across Australia,  the podcastone portal, several audio properties and a TV network.

In terms of coping with COVID and the changes it has wrought, SCA’s mantra of being fluid, flexible and agile has really helped. Media has always been fast changing, so the team needs to be ready to change direction. One big impact was the Research team being stood down to three days a week, while the amount of work stayed the same or even increased. The team coped with this by ‘leaning in’ to the use of technologies, to collaborate and accelerate the processes. These new tech-enabled, leaner processes will be an asset in the future too.

In terms of areas John wants to tackle over the next two to three years, the first is the integration of big data with surveys and qual. Along with that, how to make the qual as efficient as surveys, to make it more accessible, and then ensure that the qual results are as easily understood as the numbers.

Thinking of potential clouds on the horizon, John worries that we might turn the word ‘insight’ into a form of ‘fake news’, due to its overuse. When the team at SCA uses the term insight, they try to give it a WOW factor, ensuring it is evidence based, unique and linked to human emotion (echoing the theme of these podcasts, the ‘human experience’). It needs to make the light bulb go off and for stakeholders to say ‘Now I get it!’ Knowing how best to combine claimed and observed data is another key challenge for SCA. For digital, the data is observed, for broadcast it is mostly claimed, so there is an evolution going on to use both in the best ways.

When I offered John a magic wand to tackle three issues, his wishes were:

1. Something that would gather all the conversation going on about marketing, behavioural science and related topics, condensing it down to show what needs to be learned and what needs to be unlearned.
2. Finding the time and ways to explore the data more.
3. Ways of making surveys more enjoyable.

This is just a summary, to get the full picture listen to the podcast, either by streaming or downloading.

John has spent most of the past 40 years in the media, mainly radio and the last fifteen with Southern Cross Austereo as it’s Head of Research & Insights. During that time, John has built a team that started with just himself to one of the largest media research teams in Australia.

John’s career started as a sales person and then Sales Director for a number of radio stations in both Metro and Regional markets. After about 15 years in sales, he then took on the role of General Manager of 4BC in Brisbane for a number of years, before taking a break from the industry.

On his return he stepped into the research side of the industry, an area he had always had a keen passion for, with Nielsen Media Research, heading up their Brisbane office.

While there he undertook a number of key projects for what was then called Austereo, and it was through this that he was appointed to his current role in 2004.

Other highlights in John’s career saw his passion for basketball lead to his becoming the Marketing Director and President of the Brisbane Bullets from 1983 - 1985, during which time they won an NBL title and became Australia’s most successful sporting story of that period.

John has a great passion for both media and research and continues to absorb as much learning as he can from around the world on both of these topics. With both of these industries changing rapidly he sees an interesting and exciting future for both.


Contact us today to find out how you can create exceptional human experiences.